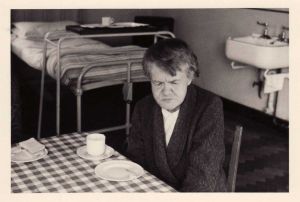 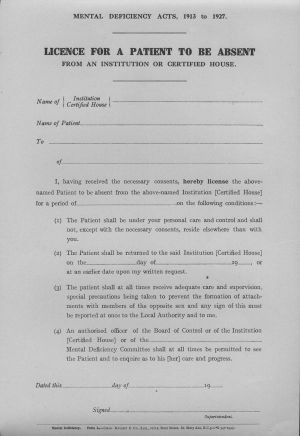 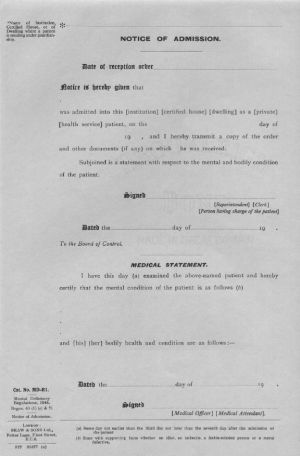 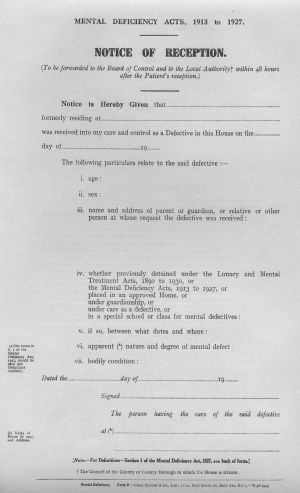 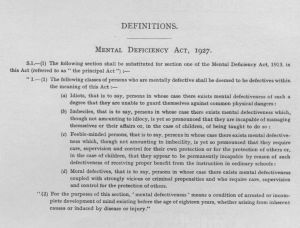 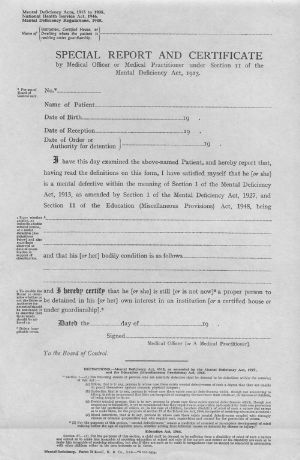 Mental defectives were created by the Mental Deficiency Act of 1913 and abolished by the Mental Health Act of 1959. They were divided into three different categories: the “imbeciles” and “idiots” who would nowadays be considered to have a learning disability and the more nebulous group of “feeble-minded”. The latter included people of average intelligence who had somehow fallen by the wayside, the “socially inefficient” as they were called in those days.

They often arrived at their diagnosis of mental deficiency via extreme childhood adversity and institutional care or the courts. In 1920 there were about 10,000 mental defectives in institutions in England and Wales; by 1946 that number had grown to nearly 60,000 with a further 43,000 under statutory supervision in the community. There were two institutions for “violent and dangerous” mental defectives: Rampton near Nottingham and Moss Side near Liverpool. Usually the inmates of Rampton and Moss Side had been transferred from other mental deficiency institutions and the violence and danger often consisted of self-harm, suicide attempts or window smashing.

In 1927 the Mental Deficiency Act, which applied only to those in whom a defect was supposed to have been present since birth, was amended to include post-encephalitics, survivors of the encephalitis lethargica pandemic who were sometimes left with destructive and anti-social tendencies as a result of the illness.

The 1913 Mental Deficiency Act defined four grades of Mental Defective. In each case the condition had to be present “from birth or from an early age”.

Imbecile ~ could protect themselves from common dangers, but unable to take care of themselves. Imbeciles were not idiots, but were “incapable of managing themselves or their affairs, or, in the case of children, of being taught to do so.”

Feeble-Minded ~ required care to protect themselves. Feeble-minded people were neither idiots nor imbeciles, but if adults, their condition was “so pronounced that they require care, supervision, and control for their own protection or the protection of others” .If children of school age, their condition was “so pronounced that they by reason of such defectiveness appear to be personally incapable of receiving proper benefit from instruction in ordinary schools”

Moral Defectives ~ moral defectives were people who, from an early age, displayed “some permanent mental defect coupled with strong vicious or criminal propensities on which punishment had little or no effect”. Unmarried Mothers also became absorbed into this category.

Deficiency and defect are not distinguished. Both imply a lack of something.

The 1913 Act brought in a range of new terms. Section 71 (Interpretation) defines the following expressions (amongst others):

place of safety: “any workhouse or police station, any institution, any place of detention, and any hospital, surgery, or other suitable place, the occupier of which is willing to receive temporarily persons who may be taken to places of safety under this Act”.

State institution: “an institution for defectives of dangerous or violent propensities established by the Board under this Act”

certified institution: “an institution in respect of which a certificate has ben granted under this Act to the managers to receive defectives therein, and includes, subject to the provisions of this Act, any premises provided by a board of Guardians and approved under this Act.

certified house: “a house in which defectives are received by the owner thereof for his private profit, and in respect of which a certificate has been granted under this Act”

“The expression board of guardians of a poor law union shall include the Metropolitan Asylums Board and any joint committee of a combination of unions constituted by order of the Local Government Board”.
The Act also established the Board of Control who took on the powers and responsibilities of the Lunacy Commissioners.

Mental Deficiency legislation had originally received support from politicians of all parties (Liberal MP Josiah Wedgewood the “last of the radicals” – was a notable opponent of the Act) as it was seen as a more humane alternative to incarceration in lunatic asylums, workhouses or prisons. But by the 1940s there was widespread concern about the numbers of people being held under the Act and the National Council for Civil Liberties led a campaign which exposed abuses of the Act and accused authorities of using the inmates of mental deficiency institutions as a source of cheap labour.

In carrying out their responsibilities under the 1913 Mental Deficiency (MD) Act, the local authority MD Committee employed an Executive Officer to “ascertain” all potentially certifiable children and adults. This man was also responsible for seeing through the process of certification and detention ( if “Care and Supervision” at home were not thought to be adequate). The Executive Officer first took “ascertained” individuals to two doctors (one specially approved) to be examined and assessed according to the three classifications given in the 1913 Act ( i.e. ” idiot”, “imbecile” or feeble minded” person). These certificates and various other papers (e.g. parent’s consent, Statement of Particulars, Petition for Order etc) were then taken to a magistrate for the order to be accepted or dismissed. Parents and the individual concerned ( if handicap not too severe) were also present at this “hearing”.

If the Order was accepted by the magistrate, the Executive Officer then made arrangements for the individual to be taken to the local institution. On arrival the individual was given another medical examination for the “Notice of Admission ” papers.