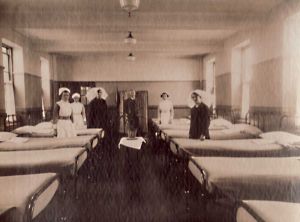 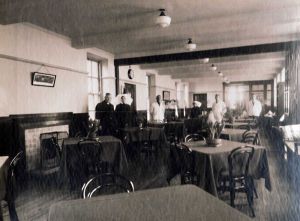 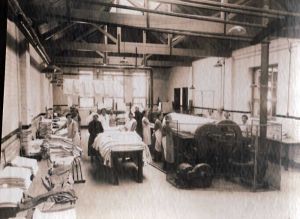 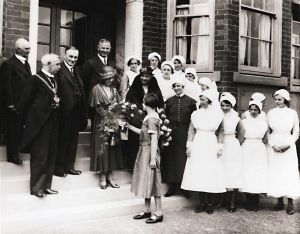 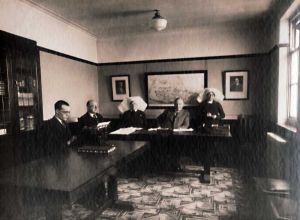 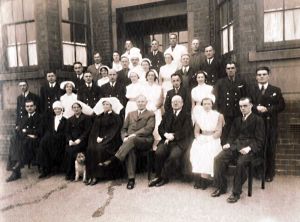 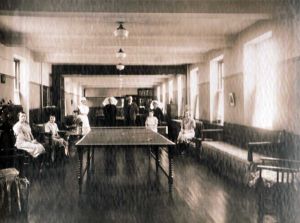 The official opening of the new Westwood Institution took place on Friday, 28th July 1933, at 3pm, by Mrs Henry Hudson, wife of the Chairman of the Mental Welfare Committee.  Charles Bywell, a patient, presented a bouquet to Mrs Hudson.

The new Westwood comprised seven blocks which were erected under the super vision of the City Architect, Mr J A Fletcher, with Mr E Griffiths of Liverpool as consulting engineer for the laundry plant, boilers, heating and hot water schemes.  The principal contractors were Messrs F T Leach and Sons, Masons, J Briggs and Sons, carpenters and joiners, G Barrett and Co., iron and steal work and F Needham, painters and decorators.  Notwithstanding the addition of a concert hall, 50 extra beds and a duplicate hot water system at an extra cost of £4.320, there was an estimated saving of £11.179 on the original £105.000.  The concert hall had been brought from Scar House Village and it accommodated 600.  The Mental Welfare Committee had aimed to provide 240 beds, but the West Riding Authorities had requested provision for a further 79 cases so Ashfield House, Thornton, with 50 beds, was retained.  Dr William Reed Thomas, Senior Medical Commissioner of the Board of Control attended the opening.

The buildings at Westwood were so arranged that the patients could be classed according to their mental abilities.  The villas were placed close enough together for the blocks to be heated from a central boiler plant.

On Monday, 17th December, 1934, a new residence for nurses was opened by Miss E M Wright, a member of the Bradford Mental Health Committee.  Before the opening of the new buildings in 1933 patients had been accommodated in Westwood House, the original private residence built in 1866.  When the patients moved to the new villas the house was altered.  In addition to separate bedrooms for each nurse, a dining room, kitchen and recreation room were provided.  At the rear of the house an outbuilding was replaced by a new wing with dress-making and needlework rooms for the female patients.  The first floor of the new wing was an isolation ward.  The building included the superintendent’s quarters.

On Saturday, 30th July, 1938, a new villa was opened by Mrs W E Collins, wife of the Chairman of the Bradford Mental Welfare Committee.  The villa called Larkfield, accommodated 60 patients.  It brought the total number of place to 300.  The villa had tables for four instead of long tables.

On Thursday, 15th September, 1938, Mr W E Collins, Chairman of the Mental Welfare Committee, opened a new bowling green at Westwood.  This was situated in front of the administrative block.  He delivered the first wood in spite of rain, and inspected the Westwood Scouts.

The Yorkshire Evening Post of 21st February 1939 reported that 300 patients at Westwood would use half a mile of underground corridors as an air raid shelter.  These corridors carried water, electricity and heating to the blocks and some gave a clearance for a man of six feet.  Each patient would have a respirator.  The Yorkshire Observer of 14th April 1939 reported that in the event of war Westwood would be taken over as a military hospital for 600.

On 27th December 1939, at the annual Christmas Dinner on their retirement from the post of superintendent and matron respectively.  They had served Bradford Corporation for 26 years, part of this time at Ashfield House.

On 28th August 1939 a code message was received by the Bradford Health Department conveying instructions that the patients at Westwood should be removed at once and preparations made for the reception of war casualties.  The Westwood patients were sent to Daisy Hill and Bowling Institutions with overcrowding and poor conditions which resulted in a scandal in 1944.

On 26th September 1945 Westwood was formally handed back to the Bradford Corporation.  It could be proud of its war record.  Four hundred beds had been provided.  No fewer  than 7.069 service casualties and 1.207 civilian casualties had been received in the hospital and 7.772 civilian patients from Bradford were accommodated at Westwood to make room for war casualties at St Luke’s Hospital.  From the blitzed areas round London 1.167 cases were received and 1.009 other cases.  Operations performed, mostly of a major type, numbered 6.286 7.472 patients were x-rayed, 17.662 films were taken.

In 1945 there were 984 names on the local register of defectives, which represented 3.77 per 1000 of the population.  40 children from the Bowling Institution were transferred to Westwood and Miss K Askroyd, night sister at Meanwood Park Hospital, Leeds, was appointed sister in charge and seven nurses were engaged.

Mr A Cave was superintendent and Miss K Ackroyd was Matron.  Dr A H Stewart was Medical Officer.

With the coming in of the National Health Service in 1948 Westwood became a Mental Deficiency Hospital under the jurisdiction of the Leeds Regional Hospital Board and the Bradford (B) Hospiatl Management Committee, H.M.C.No16.  In November 1948 the Ministry of Health agreed to the bed number being increased to 350.  In 1949 Mr Cave, Superintendent, retired.