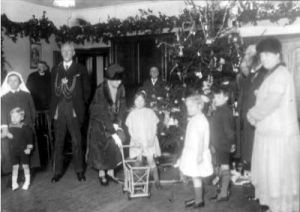 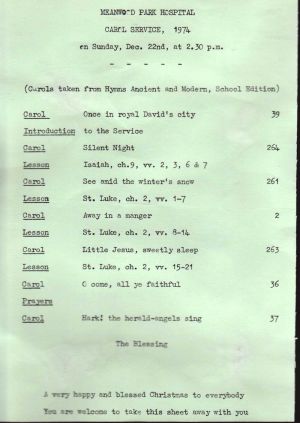 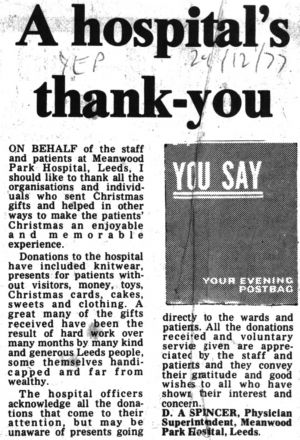 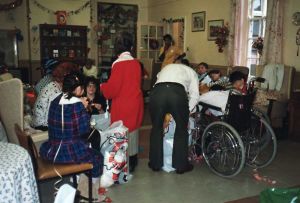 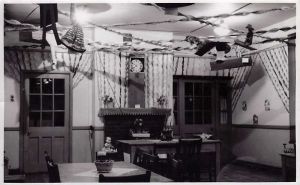 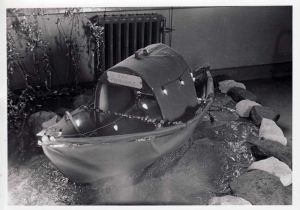 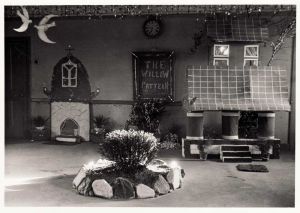 The other great institutional event at Meanwood Park was Christmas. This was the celebration that stimulated some of the happiest memories recounted. The first signs of Christmas in the colony were seen at school.

“You had to start drawing pictures of Santa Claus ands reindeer and everything like that”.

The more able residents were allowed to go down to town with staff.

“ Well they used to take us out at Christmas for Christmas Day shopping. I used to go down on’t tram.”

Carol singing, parties, dances and decorations were all part of Christmas for these men and women. Many remember going around the villas, including the ones where the most disabled people lived and wishing them a “Merry Christmas” and singing. The men in particular, recall being allowed to go “round the villas to the girls’ side”. Christmas dances were held in the recreation hall where there was “a bloke who dressed up as Santa”. Until the early 1980s, there was a Christmas show every year. For one man this increased the choices he was able to make.

“Used to be a show every Christmas, dancing and parties (or) just stopped in ‘villas.”

Parties on the villas depended upon staff preferences.

“Sometimes we had parties depending on who happened to be on duty. If there was somebody who was fond of arranging anything like that then they used to do so. Food was very different from the ordinary food.”

Nevertheless Christmas Day itself was one of the few days of rest for the colonists, who recalled the atmosphere of mutual goodwill.

For the younger residents, their excitement was contagious.

“They used to say, “hurry up. Let’s get breakfast over with then you can see your presents.”

A number of people recognised that their presents were provided for them and that they had little choice: however this does not seem to have soured their enthusiasm for Christmas.

“We couldn’t go out and but presents ‘cos we had no money but they used to, you know the government, they used to send presents. Like once they used to send me a bed jacket and like bed socks. One time they sent chocolate, but you didn’t get much, like you do now, you can go and buy your own.”

“I got quite a few (presents); some books, some crayons, pair of socks, tie, some got pullovers. The National Insurance People were only ones that sent them and to other places. Well they do that National Insurance, don’t they. I’m glad they do.”

It weren’t a case of choosing (presents) you had to be content with whatever you received which I was happy about. I used to always receive something that was of some use to me. I was happy bout that”.

Villas were sometimes elaborately decorated for Christmas and Christmas Dinner was a special meal. “ A nice dinner”, although for one man it was marred by the lack of alcohol.

“Couldn’t go out for a drink then. Used to drink orange juice”.

Judging from the pictures of Christmas Cakes for each of the villas, the skills of the colony’s cooks were considerable; cakes for each villa were elaborately decorated and distinctly different.”

Christmas at the colony for these people was the result of the successful combination of institutional resources which overcame, for the Christmas period at least, the inbuilt disadvantages of lack of money and little freedom of choice.