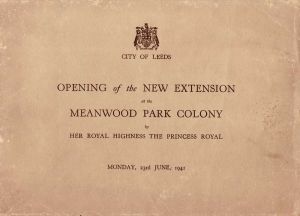 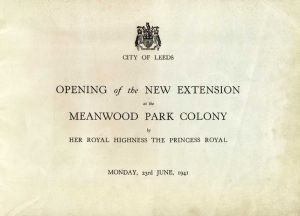 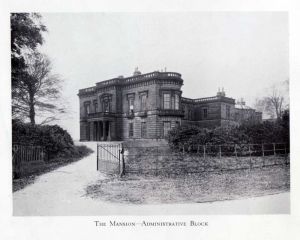 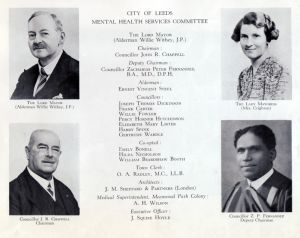 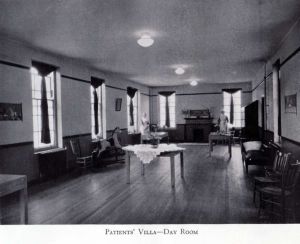 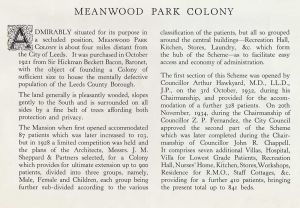 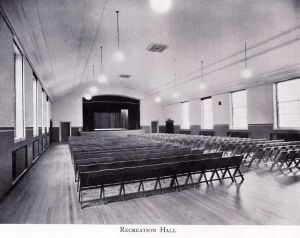 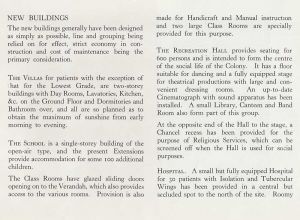 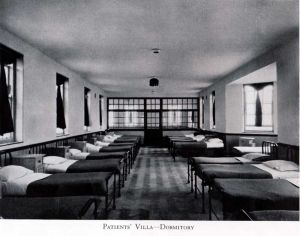 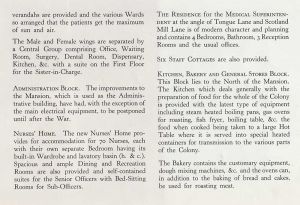 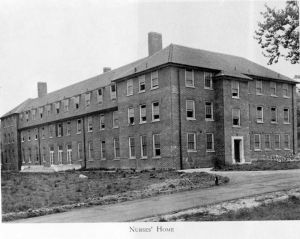 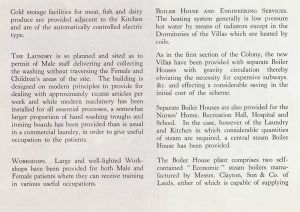 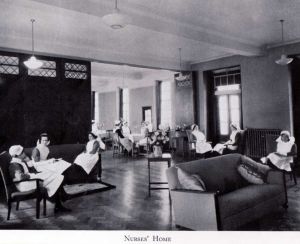 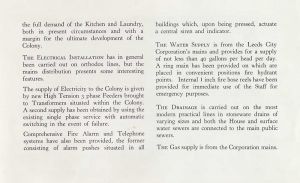 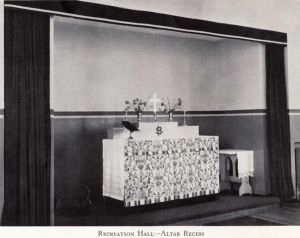 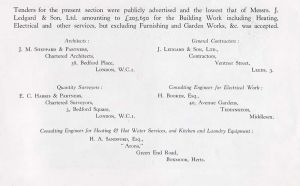 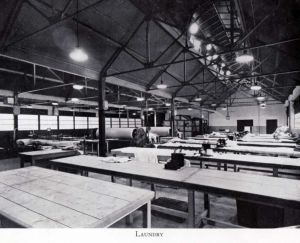 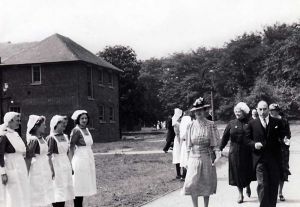 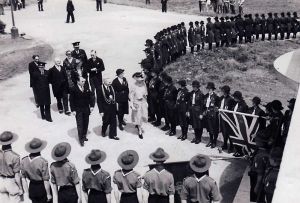 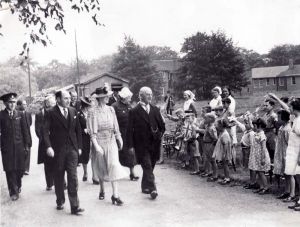 Admirably situated for its purpose in a secluded position, MEANWOOD PARK COLONY is about four miles distant from the City of Leeds.  It was purchased in October 1921 (In 1919 Leeds Corporation rented Meanwood Park to provide a ‘colony’ for the mentally handicapped, which was formally opened on 3rd June 1920, although the first patient had been admitted in the previous year.)from Sir Hickman Beckett Bacon, Baronet, with the object of founding a Colony of sufficient size to house the mentally defective population of the Leeds County Borough.

The land generally is pleasantly wooded, slopes gently to the South and is surrounded on all sides by a fine belt of trees affording both protection and privacy.

The Mansion when first opened accommodated 87 patients which was later increased to 103, but in 1928 a limited competition was held and the plans of the Architects, Messrs. J. M. Sheppard & Partners selected, for a Colony which provides for ultimate extension up to 900 patients, divided into three groups, namely, Male, Female and Children, each group being further sub-divided according to the various classification of the patients, but all so grouped around the central buildings – Recreation Hall, Kitchen, Stores, Laundry, &c. Which form the hub of the Scheme – as to facilitate easy access and economy of administration.

The first section of this Scheme was opened by Councillor Arthur Hawkyard, M.D.,  LL.D., J.P., on the 3rd October, 1932, during his Chairmanship, and provided for the accommodation of a further 328 patients.  On 20th November, 1934, during the Chairmanship of Councillor Z. P. Fernandez, the City Council approved the second part of the Scheme which was later completed during the Chairmanship of Councillor John R. Chappell.  It comprises seven additional Villas, Hospital, Villa for Lowest Grade Patients, Recreation Hall, Nurses’ Home, Kitchen, Stores, Workshops, Residence for R.M.O.,  Staff Cottages, &c. Providing for a further 410 patients, bringing the present total up to 841 beds.

The new buildings generally have been designed as simply as possible, line and grouping being relied on for effect, strict economy in construction and cost of maintenance being the primary consideration.

The Villas for patients with the exception of hat for the Lowest Grade, are two-storey buildings with Day Rooms, Lavatories, Kitchen, &c. On the Ground Floor and Dormitories and Bathroom over, and all are so planned as to obtain the maximum os sunshine from early morning to evening.

THE SCHOOL is a single-storey building of the open-air type, and the present Extensions provide accommodation for some 100 additional children.

The Class Rooms have glazed sliding doors opening on to the Verandah, which also provides access to the various rooms.  Provision is also made for Handicraft and Manual instruction and two large Class Rooms are specially provided for this purpose.

THE RECREATION HALL provides seating for 600 persons and is intended to form the centre of the social life of the Colony.  It has a floor suitable for dancing and a fully equipped stage for theatrical productions with large and convenient dressing rooms.  An up-to-date  Cinematograph with sound apparatus has been installed.  A small Library, Canteen and Band Room also form part of this group.

At the opposite end of the Hall to the stage, a Chancel recess has been provided for the purpose of Religious Services, which can be screened off when the Hall is used for social purposes.

HOSPITAL.  A small but fully equipped Hospital for 30 patients with Isolation and Tubercular Wings has been provided in a central but secluded spot to the north of the site.  Roomy verandahs are provided and the various Wards so arranged that the patients get the maximum of sun and air.

The Male and Female wings are separated by a Central Group comprising Office, Waiting Room, Surgery, Dental Room, Dispensary, kitchen, &c. With a suite on the First Floor for the Sister-in-Charge.

ADMINISTRATION BLOCK.  The improvements to the Mansion, which is used as the Administrative building, have had, with the exception of the main electrical equipment, to be postponed until after the War.

NURSES’ HOME.  The new Nurses’ Home provides for accommodation for 70 Nurses, each with their own separate Bedroom having its built-in Wardrobe and lavatory basin (h. &c.).  Spacious and ample Dining and Recreation Rooms are also provided and self-contained suites for the Senior Officers with Bed-Sitting Rooms for Sub-Officers.

THE RESIDENCE for the MEDICAL SUPERINTENDENT at the angle of Tongue Lane and Scotland Mill Lane is of modern character and planning and contains 4 bedrooms, Bathroom, 3 Reception Rooms and the usual offices.

KITCHEN, BAKERY AND GENERAL STORES BLOCK.  This  Block lies to the North of the Mansion.  The Kitchen which deals generally with the preparation of food for the whole of the Colony is provided with the latest type of equipment including steam heated boiling pans, gas ovens for roasting, fish fryer, boiling table, &c. The food when cooked being taken to a large Hot Table where it is served into special heated containers for transmission to the various parts of the Colony.

The Bakery contains the customary equipment, dough mixing machines, &c. And the ovens can, in addition to the baking of bread and cakes, be used for roasting meat.

Cold storage facilities for meat, fish and dairy produce are provided adjacent to the Kitchen and are of the automatically controlled electric type.

THE LAUNDRY is so planned and sited as to permit of Male staff delivering and collecting the washing without traversing the Female and Children’s areas of the site.  The building is designed on modern principles to provide for  dealing with approximately 10,000 articles per week and while modern machinery has been installed for all essential processes, a somewhat larger proportion of hand washing troughs and ironing boards has been provided than is usual in a commercial laundry, in order to give useful occupation to the patients.

WORKSHOPS.  Large and well-lighted Work-Shops have been provided for both Male and Female patients where they can receive training in various useful occupations.

BOILER HOUSE AND ENGINEERING SERVICES.  The heating system generally is low pressure hot water by means of radiators except in the Dormitories of the Villas which are heated by coils.

As in the first section of the Colony, the new Villas have been provided with separate Boiler Houses with gravity circulation thereby obviating the necessity for expensive subways, &c. And effecting a considerable saving in the initial cost of the scheme.

Separate Boiler Houses are also provided for the Nurses’ Home, Recreation Hall, Hospital and School.  In the case, however of the Laundry and Kitchen in which considerable quantities of steam are required, a central steam Boiler House has been provided.

The Boiler House plant comprises two self-contained “Economic” steam boilers manufactured by Messrs.  Clayton, Son & Co.   Of Leeds, either of which is capable of supplying the full demand of the Kitchen and Laundry, both in present circumstances and with a margin for the ultimate development of the Colony.

THE ELECTRICAL INSTALLATION has in general been carried out on orthodox lines, but the mains distribution presents some interesting features.

The supply of Electricity to the Colony is given by new High Tension 3 phase Feeders brought to Transformers situated within the Colony.  A second supply has been obtained by using the existing single phase service with automatic switching in the event of failure.

Comprehensive Fire Alarm and Telephone systems have also been provided, the former consisting of alarm pushes situated in all buildings which, upon being pressed, actuate a central siren and indicator.

THE WATER SUPPLY is from the Leeds City Corporation’s mains and provides for a supply of not less than 40 gallons per head per day.  A ring main has been provided on which are placed in convenient positions fire hydrant points.  Internal 1 inch fire hose reels have been provided for immediate use of the staff for emergency purposes.

THE DRAINAGE is carried out on most modern practical lines in stoneware drains of varying sizes and both the House and surface water sewers are connected to the main public sewers.

THE GAS supply is from the Corporation mains.

Tenders for the present section were publicly advertised and the lowest that of Messrs. J. Ledgard & Son, Ltd. Amounting to £205,650 for the Building Work including Heating, Electrical and other services, but excluding Furnishing and Garden Works, &c. Was accepted.