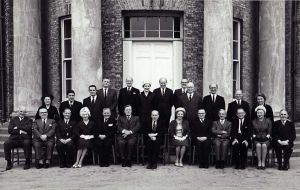 In April 1946, I was employed at Meanwood Park Colony, as it was known then as a Student Nurse. In those days it was controlled by the local authority, documentation was dealt with at Swinegate in Leeds. Interviews were held by the Medical Superintendent, Chief Male Nurse and the Matron. The course was of 3 years, as today. Training was in a room in the children’s school. The tutors at that time were Miss Cummings and later Mrs. Munnoch. The final qualification was R.M.P.A. (M.D. Certificated Nurse). Pay for student nurse was approx £3.10. 0d gross for 60 hours. No special hours were allowed for training and lectures. Nurses had to attend lectures whether they were on or off duty and on days or nights. Male nurses lived on the wards, on the farm or male hostel. No meals or catering facilities were provided for non resident staff.

In 1946, some wards were used by the military for the convalescent cases. Relatives and friends were allowed to visit once a month. No children under 14 were permitted to visit. Most of the villas were locked. Patients’ mail was censured in the Chief Male Nurse’s (Mr. Parson’s) Office. One free stamp per month was issued to each patient. Many of the patients were literate. If they behaved they were given a pass which allowed them a few weekend hours parole. Passes were signed by the Medical Superintendent. Male patients worked on the land, acres of potatoes, oats and vegetables were planted for hospital use under the supervision of Mr. Beck, Farm Manager. Female patients performed domestic duties or worked in the laundry, nurse’s home or sewing room. In the 1950s a Head Gardener, Mr. Macdonald was appointed. The hospital grounds, football pitch and villa gardens were laid out by severely handicapped patients escorted by nurses. Nursing assistant Mr. Savage, with the help of severely subnormal men, used stones dug from the ground to build walls around the hospital.

Patients were awarded 6d per week or a bar of chocolate. The Chief Male Nurse and Matron were paid by the beddage, the female side being the larger. They ran their own side of the hospital with little communication between them. The male and female patients were allowed to mix only at dances and church services and then only under strict supervision. A man was not allowed to dance twice with the same girl. All the patients were certified under the Mental Deficiency Act. Absconders were returned by the police or hospital officers.

In the male workshops furniture was repaired, basket and leather work was done and in time Mr. W.A Annison broadened the occupational activities. A few patients were taken to camp at Marske. There were day trips to Filey. Patients for outings were selected by the Chief Male Nurse and Medical Superintendent. The Board of Control paid an annual visit. The hospital always received a satisfactory report. Three meals were provided each day, food for these being collected from the kitchen by patients and staff. Male patients had to be in bed by 8p.m. except for a few in villa 15 who were allowed up a little longer. Laundry was collected and delivered by Mr. Hunt ( later to become telephone operator) assisted by patients.

Epileptic fits were difficult to control and all epileptic patients had weekly enemas. Many wore protective headgear. Most wards had 50 or more patients. A weekly dose of white medicine was given on Sunday evenings. Mr. Chapman and Mrs. Rhodes ran the Scout and Guide troop. The scouts had a drum and bugle band which gave displays on sports day and led the Meanwood Methodist Church Parade each month.

Mrs. Parsons (Tutor) raised money for the Scouts and Guides from jumble sales. A patient, Mr. Harry Waterhouse, who died in 1978, helped her. Mental testing was done by the Medical Superintendent and his deputy. All domestic work was done by staff and patients. Nurses cut patients’ hair. Mr. F. Lord was Clerk and Steward from 1942 – 1948.

“There’s a good deal of snow still about here though most parts of Leeds are now clear of it. Soon the sound of birds singing will be very noticeable and the trees will change from the black tangled skeletons to their varied greens. Another year lies ahead and I have seen many pass during my working life here at Meanwood Park. Although I freely admit to a few grey hairs, it is a bit of a shock to be invited to write something “historical” from personal experience.

I experience this same shock a summer or two ago when I was standing on the car park behind villa 3. Looking towards Villa 7 over the newly cut grass it suddenly struck me that the green expanse was noticeably smaller than it used to be. Not only that, a path along which the patients used to walk “in crocodile” was no longer there. The rhododendrons had been growing towards the sun for a quarter of a century and until this time I hadn’t noticed this.

One may ask if we who work at Meanwood Park are moving towards the sun. We have certainly passed through some dark times and to me it is rather sad to find that some of the “improvements” have, in fact, turned out to be a backward step. One example which is particularly painful to recollect during the present period of “industrial action” is the reduction of patient employment in the villas. But when one recalls the terrible overcrowding which used to exist, the handful of nurses trying to look after so many patients, the number of patients who shouldn’t really have been here at all – then we see that there has been progress.

However in my view, the greatest progress of all has been in the attitude of staff towards the patients. Some years ago I remember seeing a member of the nursing staff taking a dozen or so male patients for a walk in the grounds. He was a male nurse and he was smoking a cigarette. It was getting very near to the stub end and several patients glanced anxiously towards him hoping to be favoured with the “tab end”. He threw that tab end forwards and seemed to enjoy watching them fight over it so that a puff or two could be theirs. This kind of thing no longer happens – there is a different attitude towards the patients, it is very much better and healthier than it was.

Let us hope that with increased understanding, we continue to improve the lot of the afflicted and those associated with them, and that like the rhododendrons, we are moving towards the sun.”